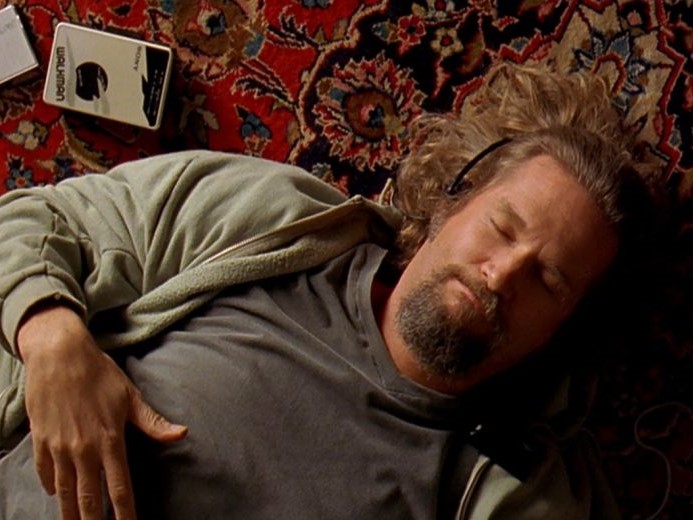 `The Dude’ abides…
The Cohen Brother’s  The Big Lebowski has somewhat of a cult following and some people just don’t get it.  If you are a product of the 60’s or 70’s then you probably had a friend just like him. Matter of fact, you probably had a friend like Walter and Donny too.  Many of us relate with this movie because we were stoners too.  Well, this is a movie review not a history lesson.
To me the movie is about these 3 buddies that have known each other since they were babies and have been together since.  “The Dude” (Jeff Bridges) is an aging hippie who stays stoned or drunk all the time (which is true) and his whole life revolves around the world of bowling with his two friends Walter and Donny. Walter (John Goodman) is a casualty of agent orange from Vietnam and suffers from a very a strong case of PTSD. We all had a friend like him.  Then there was Donny (Steve Buscemi), who is the closest to normal in the whole movie – but his shyness and the constant berating by Walter left him as, well, you know what I mean…  we all knew someone like Donny.  The slapstick style offered by the trio is amazing.  Walter makes the movie.  Lots of other things make this one of the Cohen Brother’s best.  I’ve said very little about Jeff Bridges but if he’s in any movie, he always does his best.  He is great and I needn’t say more.
Sam Elliott is also great; brings the whole movie together.
As he says “Sometimes ya eat the bar and sometime the bare eats you.”